From space the Earth appears as a blue planet, but about
one billion people are forced to drink contaminated water,
while another 2.3 billion are suffering from water shortages.
With climate change the importance of water increases.
The oceans absorb around 2bn tonnes of CO2 per year,
maybe even 2.8-2.9bn tonnes. Increasing CO2 alters the
chemistry of seawater – known as ocean acidification –
which affects marine life. On land, shortages create water
conflicts between countries and people.

Air pollution kills 7 million people each year, according
to the World Health Organisation. Worst hit are cities
in India, China and Pakistan. In China, about 1.6 million
people die from air pollution each year. In Europe, the
number of premature death from air pollution is 430.000
-800 000 persons.

The price drop in solar and wind power has initiated an
energy revolution. In Westerns Australia a renewable
energy hub of 50 GW is planned. It will produce 3.5 million
tonnes of hydrogen per year or 20 million tonnes of green
ammonia in a project estimated at USD 100 bn. In Western
Australia there is another project of 26 GW and in Oman
one of 25 GW.

The WHO warns that the obesity epidemic creates a health
crisis of immense proportions. The number of overweight
reached 2.3 billion in 2016, compared with 857 million in
1980. Weak socioeconomic groups suffer. Among African-
American women in the US 50 percent have obesity.
The US has the highest proportion of obesity among OECD
countries: 35 percent of women and 34 percent among men.
The obesity rate is even higher for women in arab countries:
40-50 percent in Saudi Arabia, Qatar, the UAE and Kuwait.

Unlike many other of the world's major cities Greater Tokyo
with 37 million inhabitants is functioning with first-class
public transport, sewage and sanitation systems.
Central to the sustainable city is an efficient land use in the
station near areas of dense settlement and concentration
of activities within walking distance of 1000 meters, and that
the station is integrated with the surrounding neighborhoods
and the region.

Humanity's collective knowledge explodes. With the James
Web Telescope astronomers can study time shortly after
the Big Bang. With the construction of the neutron spallation
source ESS in Lund physicists will be able to study materials
and microcosmos. Intelligence Watch monitors technological
progress and its implications for sustainable development.

Höganäs AB has very ambitious plans to transform its production of metal powder and use fossil free electricity and bio coke, reduce carbon dioxide emissions and invest for future sustainability.

– We work actively to minimize our environmental footprint and are committed to significantly reducing carbon dioxide emissions, and we have set high internal ambitions to have a net-zero climate impact by the year 2037 across the entire value chain (scope 1, 2 and 3 upstream), said CEO Fredrik Emilson at a conference arranged by Intelligence Watch.

Together with Cortus Energy, Höganäs are building a facility for renewable energy-gas and bio-based coal. The plans follow similar ambitious plans from the other Swedish metal industry. SSAB and LKAB, together with Vattenfall, are making a joint effort to develop the first fossil-free steel under the name HYBRIT. The technology has the potential to reduce Sweden’s total carbon dioxide emissions by at least ten percent. 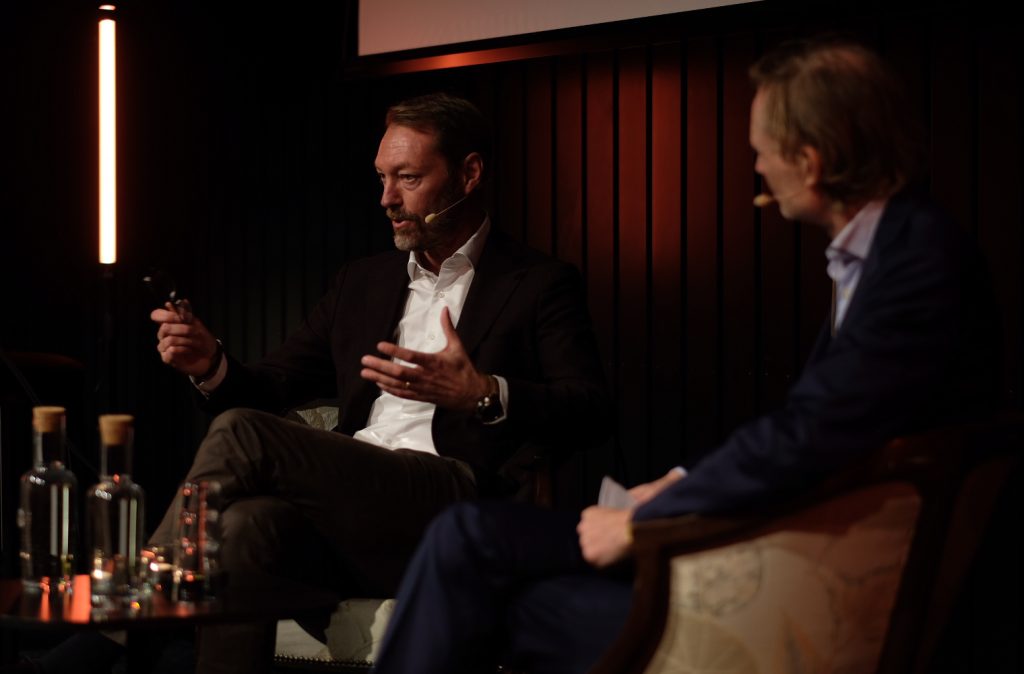 Don’t do it again! The Swedish experience with negative central bank rates in 2015-2019

Negative interest rates were once seen as impossible outside the realm of economic theory. However, recently several central banks have imposed such rates, with prominent economists supporting this move. In a column, associate professor Fredrik N G Andersson, Department of Economics at Lund School of Economics and Management and member of Intelligence Watch’s Economic Council, together with professor Lars Jonung, Knut Wicksell Centre for Financial Studies at Lund University, investigate the actual effects of negative interest rates, taking evidence from the Swedish experience during 2015-2019. It is evident that the policy’s effect on the inflation rate was modest, and that it contributed to increased financial vulnerabilities. The lesson from the experiment is clear: Do not do it again.

Would Europe Benefit from the Return of National Currencies?

Associate professor Fredrik N G Andersson, Lund University, argues that the problem for the euro area of today is not the return of the nation-state, but that the nation-states never disappeared. A common currency requires common economic policies, which is largely lacking in the euro area. As a result, large economic and social imbalances have emerged. In a chapter in the book The European Union and the Return of the Nation State he examines proposals from the European Commission to increase the level of co-operation to reduce the imbalances, but finds the proposals backward-looking and insufficient. Instead he explores the possibility of some countries leaving the euro area and finds that a friendly divorce is costly in the short term, but likely needed to restore economic balance in the long run.

Countries with high ambitions should form a climate alliance, harmonize their national carbon dioxide taxes and introduce a common carbon dioxide tariff on imports, suggests Håkan Pihl, vice-chancellor of Kristianstad University and vice chairman of Intelligence Watch, in an article in Svenska Dagbladet. The climate impact of all domestic consumption would then be priced. If the alliance is open to all countries which introduce a corresponding price (carbon dioxide tax and import tariff) a mechanism is created that gives countries outside the alliance a strong reason to consider an entry, argues Pihl.

The UN Paris agreement is characterized by low levels of commitment. In a paper in Policy Design and Practice Håkan Pihl, vice-chancellor of Kristianstad University, argues that new agreements should cover only nations that are willing to high levels of commitments and reciprocity. They should use measures that governments can control and be made accountable for. Commitments should be short-term and few-dimensional and should incentivize efficient reductions, prevent leakages to outside nations and provide sanctions for noncompliance. Further, they should provide incentives to outsiders to reduce emissions and encourage them to join the agreement. A Climate Club that harmonizes minimum national carbon prices (i.e. carbon taxes), introduces a common carbon tariff, and welcomes new members to meet these criteria. Such a complementary design also has the potential to expand and, with time, provide a global price on carbon. Read the full paper here